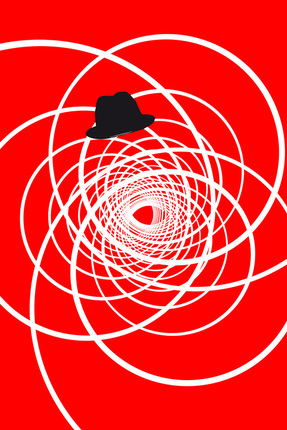 «Frame investigation» is an interactive device with video tracking. On a reconstruction of a wall section, the picture of a room is video projected. The spectator puts on a "detective" hat and he drives the photographic image by moving and the image leads drives him. He identifies what it sees as a «real» place of life, but he is in a realistic scenery. He dominates the mechanics while being dominated by itself. It does not disturb the pleasure of the vision and he maybe doesn't notice that he is in a place where everything is minutely chosen and where the three dimensions are also an effect of photographic reorganization. Everything here is only re-enactment.

Artistic approach
My practice draws from memory imaginary: art of memory, knowledge and power, cognition as well as recording technics history. I realize some projects with capture (photo or video camera, computer) and restitution devices (computer, screen, numeric printing). "Frame investigation", a tracking device, was important and punctuated my interest about frame-screen relations. I considered the limits of a relation : a spectator equipped to his exploration subject. In parallel with investigation projects (or detection projects), in which capture and restitution devices are stories generators (report to the Ultra Terrestrial Studies Center), I explored other paths about visual marks disturbance and visual muddle by creating some geometrics and programming animations. In a singular project in 2010, title "Trophies of the 6th continent", I suggested an exhibition where the notion of power was central. Sculptures of this set was made with computer generated image and make light of dumping between numeric and analogic. This collection of war vehicles skins presented as well as defeated savagery. Logics of power, of remote control and technologic codes inspired this tracking fiction.

Thomas Cimolaï
studied mnemonics (« how to record and create the world ») as well as imaginary geography notions. In 2006, obtained a post diploma at the interactive research studio in the National School of Applied Arts of Paris. Coordinated by JL Boissier, a famous media artist. Today, he continues his researches about exploration equipments and interfaces uses. He collaborates regulary with Jean-Michel Géridan, interactivity designer and professor at the fine arts school of le Havre in graphic design and art departments.